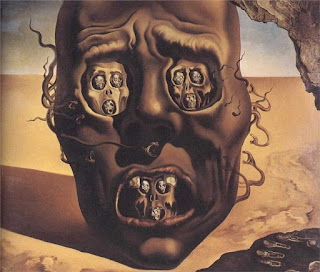 Usually art works are drawn to give you sense of love, comfort, and compassion. But in some cases, this rule was broken, here we will discover with you 5 of the scariest and mysterious arts during history.
Horror is not only in books or movies, some paintings when you look at them you feel as if you’re watching a horror scene or having a nightmare. Its true that its hard to put one of those paintings in your bedroom, but at least you can look at these paintings here. 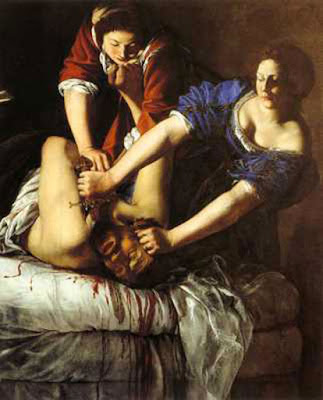 Artemisia Gentileschi an Italian Baroque painter draw this painting by 17th century and was the embodiment of the murder committed by a Jewish widow named Judith after the Assyrian leader Holofernes attacked her city under his captivity. Judith took off her clothes with her maid and entered the camp of the Assyrian leader, who welcomed her as a new plunder to help him getting the city under captivity, and as he prepared big meal for her, Judith lures him to drink and then seduces him to his tent, believing that he will make love with her, she cuts his head with his sharp sword after he lost his consciousness. 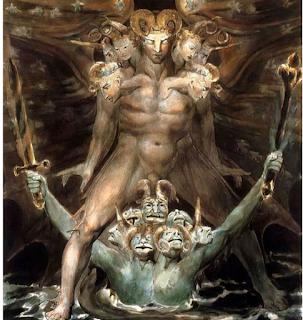 A drawing by William Blake an English artist and poet than was famous for his romantic poems, and for his mysterious artworks. In this painting William shows the great red dragon from Apocalypse, the dragon is drawn to have seven heads and ten horns, seven crowns on his head, his tail drew one third of the stars in the sky, throwing them to earth. 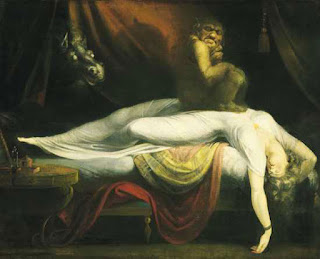 It was drawn by the swiss artist John Henry Fuseli in 1781, and it became very famous when it was first presented in France which forced Fuseli to draw different versions of it.


Shown in the painting a sleeping woman wearing white dress and appearing on her face and texture the feelings of uncomforted and anxious after the nightmare she saw which is drawn above her which describes a monster sitting above the women who used to seduce her while she is sleeping and watching them in the background an animal which looks like a horse. The painting gives the feelings of willies to anyone who used to see it.

The hands resist him 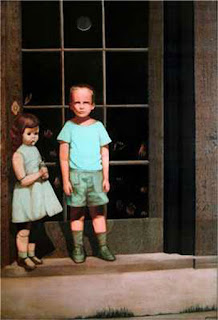 Painted by the American artist Bill Sutinham in 1972, and after presenting it on artistic Bai website the painting caused a sensation because of what was reported about the disappearance of children who appear from time to time, and that they were moving at night outside the painting.
The two children appear in the painting in a frightening way without eyes, while in the background there are several small hands for other children trying to resist the glass barrier where the two children stand in front of them in the painting. 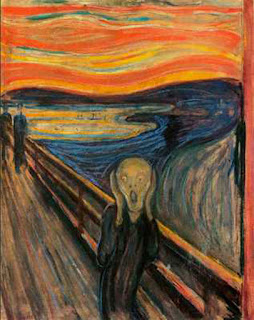 This painting is one of the most famous paintings ever, it was painted by the Norwegian expressionist artist Edvard Munch in 1895. The artist wrote a poem in which he mentioned the reasons for his painting: "I was walking with a friend - the sun was falling - and suddenly the sky was red - I stopped straining and leaned on a fence - there was blood and the sun flame over the sea strait and the city - my friends continued walking and i stood there trembling, I felt an endless cry from nature. "The cry of nature is one of the most expensive paintings of the world, which was sold at the Sotheby's auction for $ 111.9 million.

Popular posts from this blog

Art X Pop Beyonce and Jay-z take over the louvre


The couple caused a heated controversy by using the Louvre as a location for their recently released music video and collaborative album, the Carters show just how much their dynamic as a couple has evolved. There new album The most widely shared photograph showed Jay-Z and Beyoncé flanking the “Mona Lisa,” approximating her dodgy expression.


The Atlantic ~ So how did one of the most visible couples in the music world—who have already toured together and put out decades of videos about their love, sex, and mutual success—create something that feels even the slightest bit fresh? The spectacle of making new art using some of the most famous Western art in the world certainly helped. But though the duo had grappled with their evolving conceptions of gender in their own projects, “Apeshit” and Everything Is Love represent the Carters’ first real attempt to stitch those ideas together into a cohesive whole. Until this point, most of their collaborations had credited them …
1 comment
Read more


Iris van Herpen the 34 years old Dutch fashion designer who is widely recognized as one of fashion’s
most talented and forward-thinking designers that always push to break  the boundaries of fashion design. Since her first show in 2007 van Herpen has been preoccupied with inventing new forms and methods of sartorial expression of fashion by combining the most traditional and the most radical materials  constructing master pieces by her unique methods to take us into her unique aesthetic vision. She calls this design ethos “New Couture.”
~Van Herpen about describing her work
If I were to use one word to describe my work, it would be movementas one of the most influential things in my life has been my classical ballet practice. Through dance I learned about the seduction of movement, the transformation of the body and the ‘evolution’ of shape. Those years taught me how to shift shape and were the birth of my interest in fashion.I Don’t think of fa…
4 comments
Read more

March 08, 2019
29 fast-rising independent female artists join forces to tackle gender
inequality on International Women’s Day.
On Friday 8th March 2019, International Women’s Day (IWD), 29 of the fastest rising female artists from 7 countries are joining forces to release a powerful compilation album. T​urn Her Up (album) will face up to the astonishing gender imbalance that exists within the music industry, whilst celebrating the vital role that female artists have played in shaping the discourse of popular music.
Artists including, ​Pixie Lott​, ​Emma Heesters​ ​and ​Mariana Nolasco​ ​will each release a stunning rendition of tracks originally performed and/or written by iconic female musicians. Released as part of the ​#TurnHerUp​ campaign, the group who have a combined social reach of 35+ million are raising awareness of the startlingly disproportionate gender divide across the music industry.
With all areas considered, the industry is estimated to be ​70% male vs 30% female​. Equally concerning…
Post a Comment
Read more